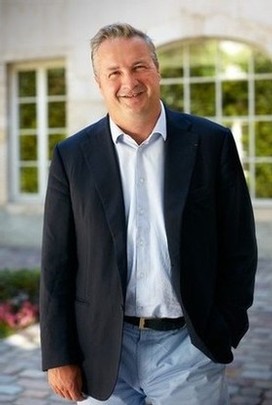 Louis-Fabrice Latour, born the 29th of February, 1964 in Beaune (in the Côte d’Or, France), is the son of Louis Paul Latour, who was the Chairman of Maison Louis Latour, before passing on April  5th, 2016.

He has the distinct honor of serving as the 7th Louis to manage the family wineries. Louis-Fabrice Latour is a graduate of the Paris Institute of Political Science (class of 1985). After graduation, he worked a year at Paribas in Paris as Attaché de Direction. He became General Managing Director of Maison Louis Latour in 1999 and has also been the President of the “Syndicat des Négociants en Vins Fins de Bourgogne” since 2003.

Louis-Fabrice Latour is an active member of the “Bureau Interprofessionnel des Vins de Bourgogne”, the F.E.V.S. (Fédération des Exportateurs de Vins et Spiritueux de France), and the Hénokiens Association in Paris. This club only accepts companies that are leaders in their respective fields, remain family owned, have a history of 200 years’ experience and still bear the name of their founder. There are only approximately 30 of these companies in the world.  In 2011 he  was awarded the French Legion of Honor- the highest decoration bestowed by the nation.